Pearl Thusi Weighs In On Anele Mdoda’s Old Tweets and Calls for Kindness. There is a saying that you can’t run away from the past, it always catches up with you. Ever since that infamous tweet where Anele Mdoda dissed Kelly Rowland over her looks back in June 2020, she has never known peace. Black Twitter constantly drags her when Kelly shares a hot picture of herself on social media.

The big question that has been on many people’s minds has been; Does Kelly know what’s going on? This is because even though the American superstar gets tagged by South Africans over the issue, she has never uttered a word. Well, as they say, actions speak louder than words, and what Kelly recently did made a lot of people conclude that she is aware of what Anele said about her looks, and that she also knows why her pictures always trend on South African Twitter.

Kelly shared a picture of herself on vacation in Italy. What caught the attention of many tweeps is that she rocked the same swimsuit that Anele wore a month ago when she took over the Maldives. Could this be a coincidence, or Kelly was communicating something? Well, tweeps once again compared the two women based on who rocked the swimsuit best.

Among those people who has shared their views on the matter is Pearl Thusi. The media personality, actress and entrepreneur never shies away from having an opinion on controversial issues. Pearl, admits that Anele’s past tweets were unnecessary, to some people, but said they are no different if they stoop to the same level.  She is disappointed that the whole debate has now gone to body shamming.

Pearl who stated that she has some new kindness and love direction, also noted that some people are enjoying punishing Anele. On the other hand Anele has not said anything since Kelly posted that swimsuit picture, which is identical to hers. 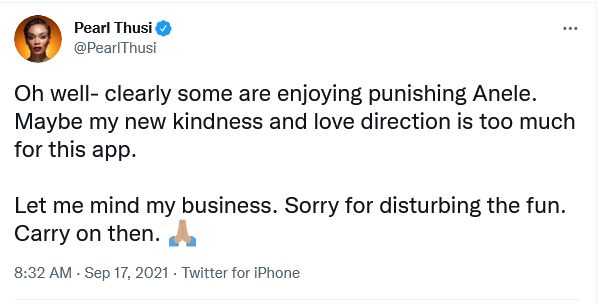