Pearl Thusi Reacts To Behind The Story Having A New Host. The show is coming back next month for it’s 5th season. Just like any other show out there, Behind The Story, always comes back bigger and better every season. This time around, the show has a new presenter and we can’t wait to see how she will fare.

Nomalanga Shozi, has just been unveiled as the new host of Behind The Story. The TV personality, actress and Face of BET Africa will make her much anticipated debut on the 9th of October. Nomalanga has done a lot in the industry as and actress, TV host as well as major award shows host. The versatile personality will replace Pearl Thusi, who parted ways with he show after season IV.

How sweet is it that even though Pearl is not returning for season V, she is happy for the new hosts! The talented actress and media personality revealed that she is happy for Nomalanga and wished her and Behind The Story nothing but the best.

“So excited for @RealNomalanga and wish her and the show nothing but the best,” Pearl said. 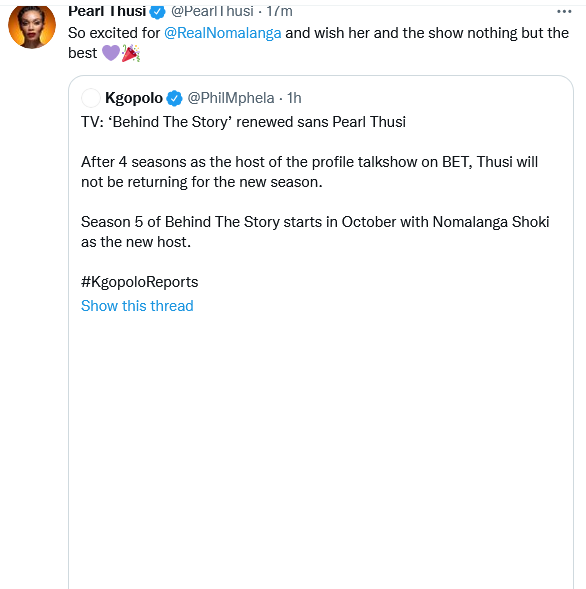 To continue with the beautiful spirit of sisterhood, Nomalanga applauded Pearl for the wonderful job she has done while she was still the Behind the Story host. She promised that she won’t disappoint Pearl, as she takes over form where she left. Nomalanga will make her much anticipated debut on the 9th of October 2021 on BET.