Oops! Nambitha Ben-Mazwi Catches Other Celebrities Gossiping About Her. Nothing is as hurtful as gossip. People drag your name in your absence, sometimes even lying and you are not there to defend myself. Sadly, no matter how good you are as a person, others are still going to gossip about you, and in some instances the news will reach you.

This is the exactly the case with Nambith Ben-Mazwi. As an actress, she is in a very competitive industry, and not everyone will be happy about her growth. Nambitha has been bagging major role after another, and this is a clear indication that she is a talented hard worker. At the moment she is on The Estate, where she plays the role of Gigi, a sexy, beautiful and strong siren who will disrupts the lives of the characters that are joining the show.

Nambitha is also famous for roles like Shaqueesha an American student with a mental illness on The Queen, Chardonay or Shado on Scandal! and Lulama on Broken Vows. In December 2020, she bagged a role on How To Ruin Christmas: The Wedding series, where she played the role of Refiloe, who is one of Beauty’s bridesmaids. These are just some of the roles that Nambitha bagged over the years.

Unfortunately, although she is one of the most least troublesome celebrities out there, here and there, Nambitha also receives her fair share of drama. She has just revealed that at a recent interview in a show she was a guest at, she became the latest victim of malicious gossip. Nambitha caught the two celebrities who host that particular show, gossiping about her.

“Just wrapped a show where I was a guest… I got so disappointed by two celebs (hosts), who decided to do a quick gossip session about me while I’m standing right there. Now I remember why I often don’t like associating with this industry. Also, what they said was a laugh too,” Nambitha said. 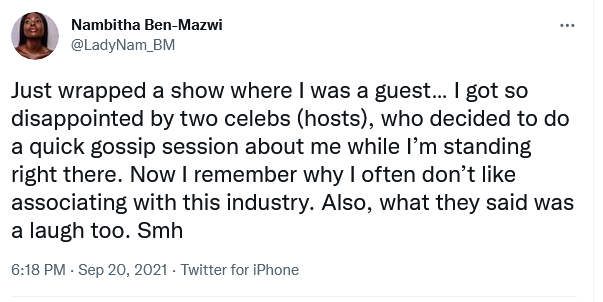