5 Times Nomzamo Mbatha Slayed Major Red Carpet Events In The US. It goes without saying that she is among the best dressed celebrities in the country. As someone who gets to attend as well as host major event in the country and abroad, Nomzamo Mbatha always makes sure she looks her best.

The talented actress and media personality who is now based in Los Angeles is moving mountains, both professionally and personally. Nomzamo is currently making international news since she scored a role in Eddie Murphy’s upcoming Coming To America sequel, which will premier on the 5th of March 2021. She co-stars alongside Arsenio Hall Tracy Morgan and Garcelle Beauvais, among other Hollywood greats.

The fashion forward personality has already caught the attention of major media outlets in the US. Beginning of the year, Essence included her among Young Black Hollywood stars to Watch in 2021. Recently Nomzamo, got a feature from Hollywood Reporter where she was also named, ‘The Next Big Thing’. On the 3rd of March, our Golden Girl, was a guest on the hit America talk show The Real. Talk about making an impact!

On top of making a name for herself abroad, Nomzamo also represents us very well on the red carpet. Although now, most events are held virtually, she always comes through nonetheless. Check out how Nomzamo slayed different functions, she attended or hosted in America so far.

4. The International Celebration of MantshoxHM Collection In New York 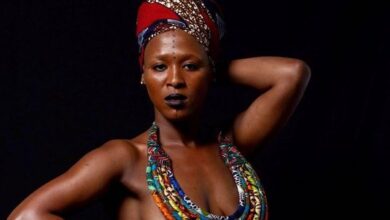