Quade Cooper is an immensely talented fly-half who turns out for the Reds and Australia but in recent times, he has hit out at the Australian Rugby Union which has raised doubts over his future in rugby union. He arrived in Australia as a 15-year-old, but quickly confirmed his status as one of his adopted country’s best midfield talents. Quade’s ascension through Australian rugby has been as impressive as it has been rapid. After making his Super Rugby debut for the Reds as a teenager, the midfielder went on to earn his first Australia cap against Italy aged 20 in 2008 – memorably scoring a try to spare the Wallabies’ blushes against the Azzurri. Here are 10 things you probably didn’t know about this inked athlete. 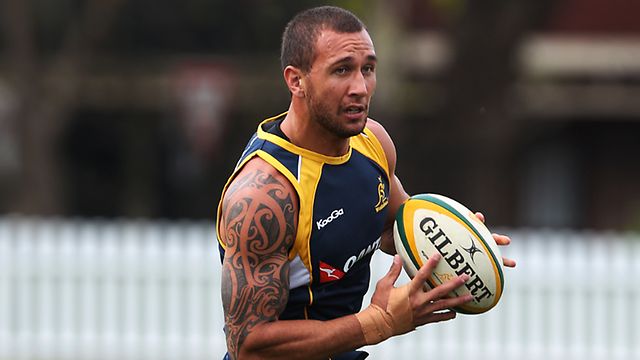 2. Quade was born in Auckland, New Zealand but moved with his family to Tokoroa at a young age

3. He then attended Forest View High School, before moving to Brisbane, Australia

4. Quade further attended Springwood State High School in Australia before winning a scholarship to Anglican Church Grammar School (Churchie), where he starred for the 1st rugby team in 2005 and 2006

5. He formerly dated Australian Olympic swimmer Stephanie Rice after she attended the 2010 John Eales Award Ceremony with him

8. In December 2009, Quade was charged by police with burglary after allegedly taking two laptops from a residence on the Gold Coast, although the case was dropped due to insufficient proof.

9. Quade is also a beast in the boxing ring and does it professionally too

10. For Quade, white belts and white shoes are a total no-no