The homosexual community in South Africa had been treated as a group of people with a disease by those who don’t understand to refuse to accept their existence. This has unfortunately lead to violence against them such as corrective rapes and assaults. For this reason support groups and organisations have developed in h country and all around the world to create a safe space for them and to help them where necessary. It’s not only homosexuals who need the support but also the people in their lives. This list therefore gives you 10 organisations that you can turn to for help. 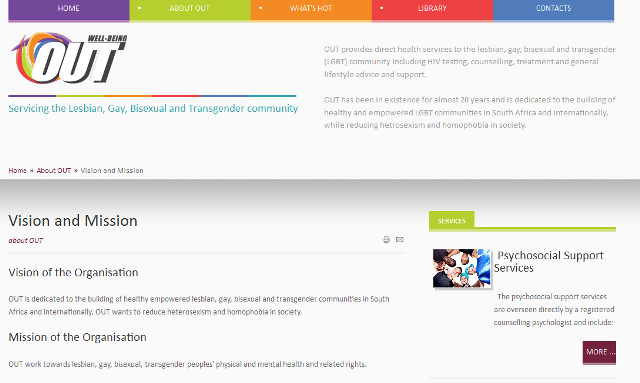 OUT provides direct health services to the lesbian, gay, bisexual and transgender (LGBT) community including HIV testing, counselling, treatment and general lifestyle advice and support. It has been in existence for almost 20 years and is dedicated to the building of healthy and empowered LGBT communities in South Africa and internationally, while reducing hetrosexism and homophobia in society. 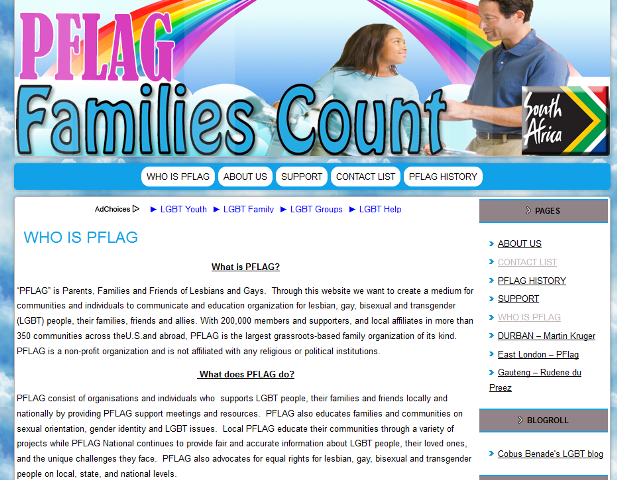 “PFLAG” is Parents, Families and Friends of Lesbians and Gays. Through this website we want to create a medium for communities and individuals to communicate and education organization for lesbian, gay, bisexual and transgender (LGBT) people, their families, friends and allies. With 200,000 members and supporters, and local affiliates in more than 350 communities across theU.S.and abroad, PFLAG is the largest grassroots-based family organization of its kind. PFLAG is a non-profit organization and is not affiliated with any religious or political institutions. I Am Gay consists of a group of volunteers who are passionate about gay life and dedicated to the building of healthy empowered lesbian, gay, bisexual and transgender communities in South Africa and internationally. They offer free resources to parents, family members, friends and anyone who is interested in learning more about Gay Life. The I Am Gay network provides free resources to the GLBTI Community as well as parents, family and friends. IAmGay.co.za is dedicated to support gay, lesbian, bisexual, transgender and inter-sex communities in South Africa and internationally and to reduce heterosexism and homophobia in society. 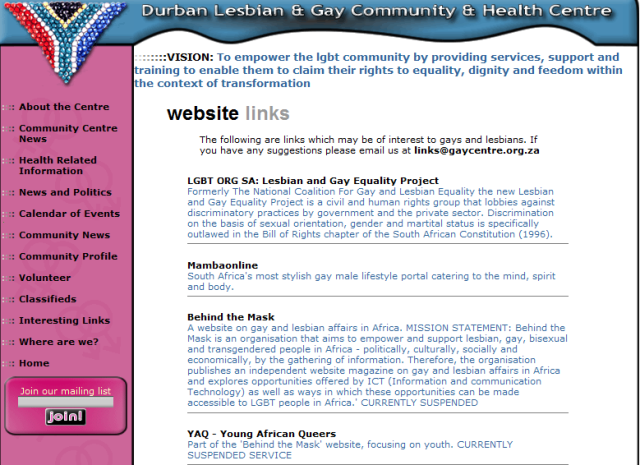 The Durban Lesbian & Gay Community & Health Centre (a project of the KZN Coalition for Gay & Lesbian Equality) is a Drop-In Centre, safe and secure space for lesbian, transgender, gay, bisexual, and intersex communities in Durban and KwaZulu-Natal. They provide Personal, HIV and AIDS Counselling and do referrals for Legal Counselling and Advise. They also cover matters ranging from understanding own sexual orientation, health status, coming out (LGBT and HIV+), mitigating/fighting stigma and discrimination, homelessness, drug and alcohol use/abuse, living positively, drafting wills, same-sex marriages and divorce. 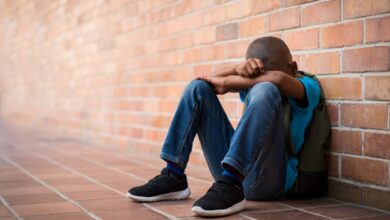 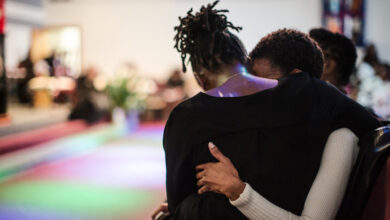 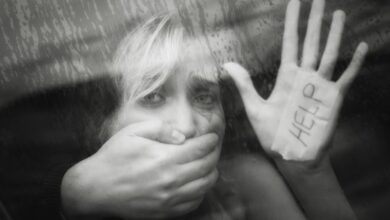 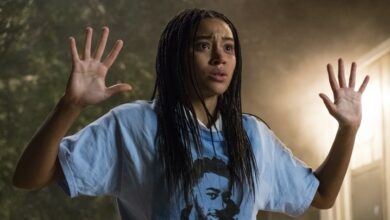