Lekau Sehoana Comes Through for a Man Ridiculed for Wearing Fake Air Force Sneakers At Groove. Sometimes when people try to pull you down, you get raised even more. Remember the KFC wedding that took place in 2019? It all started when Hector Mkansi proposed to his partner Nonhlanhla Soldaat in a KFC outlet. Someone made fun of the couple on social media, and that moved many South Africans to give them an extravagant wedding.

That is sadly the culture with social media, to ridicule those who are underprivileged. Just a few days ago, one man was made fun of for wearing ‘fake’ sneakers at groove. A video that trended on social media saw the man’s shoe being paraded around with a mean crowd singing that the Air Force wasn’t an original. Although it was fun for some to witness, others were not amused and called out the behavior.

One of those who, was not impressed by all this is local comedian Tiisetso Masike. Although he has done hilarious videos about women gossiping at funerals, parents disciplining kids, and so forth, Tiisetso definitely knows where to draw the line. He was not happy that someone can be humiliated like that, and took to Twitter to ask for the details of the man so that he could sponsor him for a Spa treatment.

Tiisetso’s good deeds touched so many other people who reached out to the man. One of those people is businessman Lekau Sehoana. The Drip Footwear founder asked for the man’s details so that he can gift him some shoes. He also applauded Tiisetso for all the love he has shown. This is quite heartwarming, more so since a lot of people are dealing with mental health issues. Love needs to be spread every now and then. 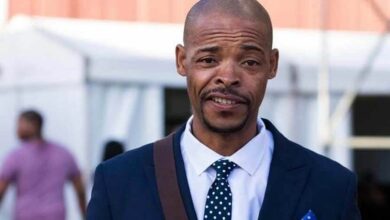