Lesedi Matsunyane Still Battling To Come To Terms With Shona Ferguson’s Passing. The death of a parent is the most painful thing to experience. More so if that parent was a present one who loved their kids with everything they got. One person, who is going through the most after losing a parent two months ago is Lesedi Matsunyane.

Her step father Shona Ferguson passed away on the 30th of July 2021, after battling Covid-19 for a while. His untimely death left his family, the industry as well as fans in despair. The award winning actor and director, was also a great father to his daughters Lesedi and Ali, as well as a cool grandfather to Roro. The trio shared heartfelt tributes at Shona’s funeral, expressing how much he meant to each of them.

A few weeks ago, Lesedi had the honor of representing the family at the Royalty Soapie Awards. Together with Mutodi Neshehe and Menzi Ngubane’s widows, Lesedi presented a segment to honor creatives we have lost this year.

“Shortly after presenting this segment, I broke down backstage. We have lost so many of our own in the shortest time,” Lesedi said. 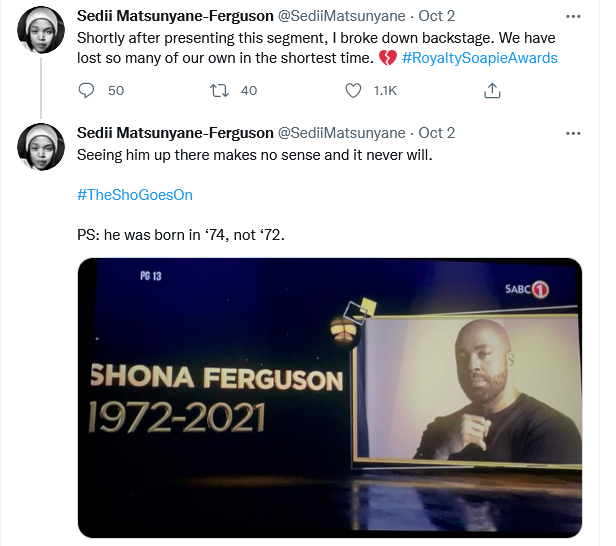