So, AKA’s latest #BaddestRemix featuring Fifi Cooper, Moozlie, Gigi Lamayne alongside Rouge is on everyone’s lips as we speak. There’s no doubt that the rapper has created yet another hit record that is promising to go down in the history books having worked with some of the hottest female MCees in SA. AKA’s Baddest Remix was dropped on November 17 and within few minutes, social media was abuzz with all sorts of comments. The hashtag #BaddestRemix made the Twitter trends list. Hundreds of fans couldn’t stop criticizing the girls’ rap skills. Rapper and TV personality Nomuzi Mabena who is one of the female rappers featured on the remix was highly criticized for her performance. Some fans were not impressed, taking to Twitter to throw shade at poor Nomuzi.

In a recent interview with The Juice, Nomuzi addressed all the haters who thought she didn’t do a great job on the remix.  “Moozlie” feels she did her best and she pointed out that she has developed a thick skin all thanks to K.O’s advice, who said, “You got to have a thick skin, if you don’t you won’t survive this game”.

Watch the video below to find out what Nomuzi thinks of her verse on the song….. 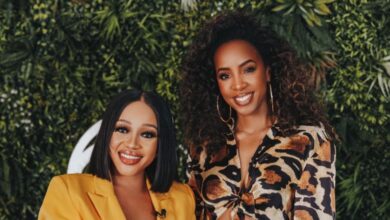