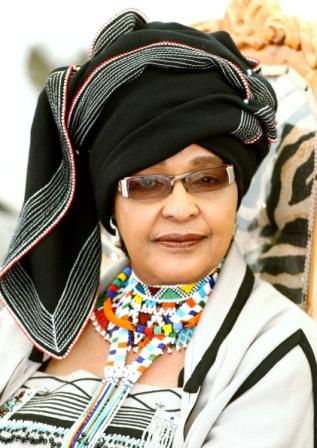 2.  Winnie Madikizela–Mandela was born on the 26th of September 1936 in the village of eMbongweni Eastern Cape Province

3.  Despite restrictions on education of blacks during apartheid, she earned a degree in social work from the Jan Hofmeyer School in Johannesburg, and several years later earned a Bachelor’s degree in international relations from the University of Witwatersrand

5.  For many of those years, Winnie Madikizela Mandela was exiled to the town of Brandfort in the Orange Free State and confined to the area, except for the times she was allowed to visit her husband at the prison on Robben Island

6.  Beginning in 1969, she spent eighteen months in solitary confinement at Pretoria Central Prison

9.  In June 2007, the Canadian High Commission in South Africa declined to grant Winnie Madikizela Mandela a visa to travel to Toronto, Canada, where she was scheduled to attend a gala fundraising concert organised by arts organisation MusicaNoir, which included the world premiere of The Passion of Winnie, an opera based on her life

10.  Winnie Madikizela Mandela criticised the anti-immigrant violence in May–June 2008 that began in Johannesburg and spread throughout the country, and blamed the government’s lack of suitable housing provisions for the sentiments behind the riots. She apologised to the victims of the riotsand visited the Alexandra township She offered her home as shelter for an immigrant family from the Democratic Republic of the Congo

12.  Jennifer Hudson played her in Winnie Mandela, directed by Darrell Roodt, released in Canada by D Films on 16 September 2011

14.  When the ANC announced the election of its National Executive Committee on 21 December 2007, Winnie Madikizela Mandela placed first with 2845 votes

15.  Winnie Madikizela Mandela is popular among her supporters, who refer to her as the ‘Mother of the Nation’